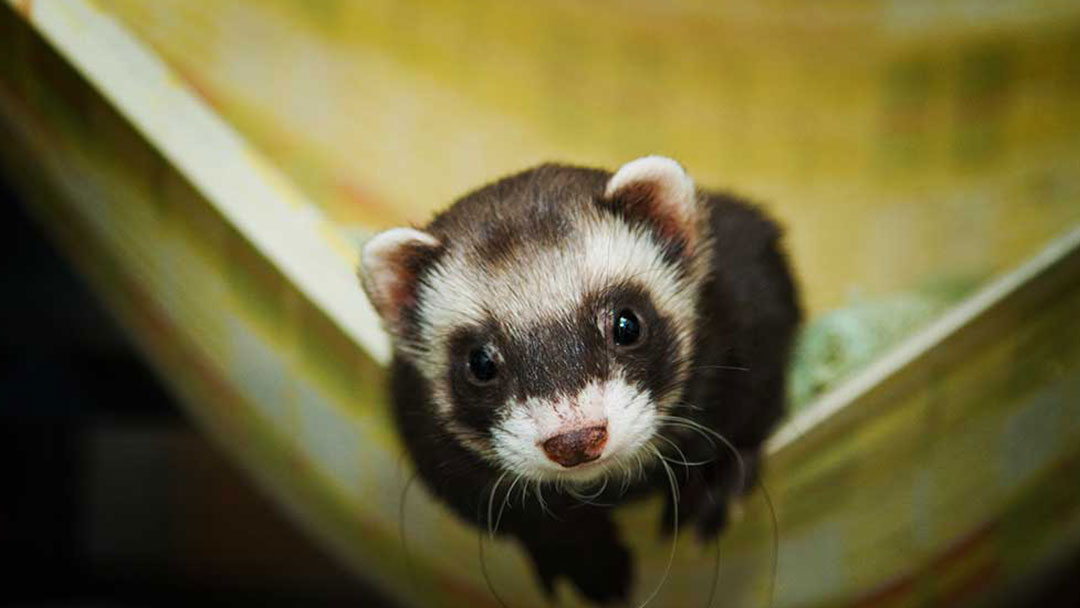 Fun, fascinating and forever into mischief. Ferrets make great pets but be you need to be aware of the diseases they are susceptible to and how to prevent them.

Diarrhoea is not a disease, but an indication of a gastrointestinal problem, which can have many causes. Intestinal parasites can be a cause of diarrhoea in ferrets, as well as viruses and intestinal foreign bodies. Proliferative colitis is a disease of young ferrets caused by a Campylobacter bacterium and results in a mucous-like diarrheoa containing blood. The animal may also show anorexia (loss of appetite), weight loss, lethargy and depression.

Diarrhoea in ferrets can be treated with several different medications, depending on the cause. Infectious causes of diarrhoea are treated with antibiotics, and fluid and electrolyte replacement may be required if severe. Never give your ferret any medications or home treatments without checking with your veterinarian first and obtaining a proper diagnosis.

Ferrets are very susceptible to the dog distemper virus. The disease is 100% fatal in ferrets and all ferrets should be vaccinated against distemper at 8, 12 and 16 weeks of age, then yearly. The incubation period is 7 -10 days and clinical signs are similar to those in the dog with thick eye and nasal discharges, fever and loss of appetite. Often there is a rash under the chin and groin area. The terminal phase of the disease is characterized by central nervous system signs, including muscle tremors, convulsions, coma and death. Affected ferrets must be isolated from other susceptible animals and supportive treatment may be started until the diagnosis of distemper is certain, when euthanasia may be recommended.

Ferrets are also susceptible to the human influenza virus (flu). The incubation period is only 24 – 48 hours and the course of the disease is usually 5 days. Clinical signs are similar to people with the flu (and to the early signs of distemper) with nasal discharge, sneezing, fever and loss of appetite. Treatment consists of decongestants and antibiotics if there is a secondary bacterial infection. Occasionally fluid therapy may be required. Never give any human flu medications as ferrets, like dogs and cats, can be easily poisoned or killed. Isolate affected ferrets, especially from young ferrets, which can be more severely affected by the disease.

Intestinal foreign bodies are a common problem, especially in young ferrets, due to their inquisitive nature. Many household items, such as furniture stuffing, rubber bands, and parts of shoes and toys that are easily chewed into pieces and swallowed, can all lead to intestinal obstruction. Signs of obstruction are common to many ferret diseases and include anorexia, vomiting, lethargy, diarrhoea and gradual weight loss. Severe and projectile vomiting indicates a complete intestinal obstruction. Any of these symptoms are a cause for concern and should be immediately investigated by your veterinarian for early diagnosis. Treatment of intestinal foreign bodies usually requires prompt surgical removal.

Like dogs and cats, ferrets are also susceptible to worm infections. Your vet can recommend a suitable worming product and a yearly microscopic examination of the droppings by your vet is recommended. External parasites such as fleas, ticks, mange and ear mites can also infect ferrets. Treatments used in ferrets are the same as for dogs and cats, and where appropriate use those formulated for puppies and kittens. Ferrets are also a natural host for the heartworm, Dirofilaria immitis, and should be placed on a heartworm preventative as recommended by your vet.

Ringworm is occasionally seen in ferrets and signs of infection, as in dogs and cats, is a circular area of hair loss with some scaly patches around the edges. Ringworm can be transmitted to other pets and to people so it is important to have the diagnosis confirmed by your vet. Special cultures of the skin, scales and hair need to be performed to distinguish the disease from other skin conditions with similar signs. Treatment involves medicated shampoos, topical (external) medications, and oral medication in severe cases.

Ferrets can develop cancer earlier in life compared to dogs and cats, sometimes as early as one year of age. The more common cancers that occur in ferrets are cancer of the pancreas (insulinoma), adrenal gland tumours, and lymphosarcoma (cancer of the lymph nodes and lymphocytic white blood cells). Any lump or abnormal swelling should be immediately investigated by your vet to detect for cancer. Many cancers in ferrets can be treated successfully by surgery, medical chemotherapy or a combination of both if diagnosed early.

Ferrets and the law

Please note that ferrets are banned as pets in Queensland and the Northern Territory. In the ACT you need a licence to keep ferrets. Further information is available from animal control/environmental staff at your local government office.

Mental Health Issues and Your Pet

Making That Painful Decision – Putting Down Your Pet

Help – I Think My Dog Had a Stroke